Is every Bill an Emergency?

(CNN) -- Whether by omission or commission, both the White House and Congress get a dose of blame for not living up to the new era of transparency promised by President Obama.

The president's old campaign Web site still has this commitment there for all to see:

"As president, Obama will not sign any nonemergency bill without giving the American public an opportunity to review and comment on the White House Web site for five days."

Well, the president broke that promise barely a week after taking office when he signed the Lilly Ledbetter Bill dealing with equal pay for men and women.

A good bill, and certainly one that could have survived a five-day comment period. So, maybe the White House folks just forgot?

But then there is Congress and the Stimulus Bill. How fast could you get through it?

According to the nonpartisan Sunlight Foundation, lawmakers had just 13 hours to read 1,100 pages of material that would cost the American taxpayer $787 billion.

That's less than a minute and a half per page, with no time for bathroom breaks. No wonder so many of our lawmakers didn't seem to notice that last-minute exemption clearing the way for bailed-out companies like AIG to pay out big bonuses.

So, the House tried to clean up the mess last week by rushing through another bill -- a tax on AIG bonuses. That bill was just 11 hours old before it went on the floor to be argued and then quickly approved.

And the list goes on well before the president took office.

The bank bailout got all of 29 hours, the rescue of Fannie and Freddie was only available for 19 hours. This is how bills could literally become, to borrow a phrase, too big to fail -- and too fast to stop.

The Sunlight Foundation is calling on Congress to allow the American people three days, 72 hours, to read a nonemergency bill online before debate begins. We strongly agree.

And yes lawmakers, you can have three days to read it over, too, before taking a stand. As for President Obama's promise of a five-day public review once a bill leaves Capitol Hill headed for his desk, it would be nice if he kept his word on this going forward. - CNN
at 3/23/2009 09:42:00 PM 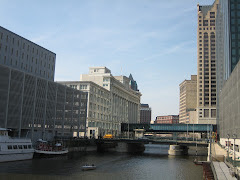 Home of the Brewers